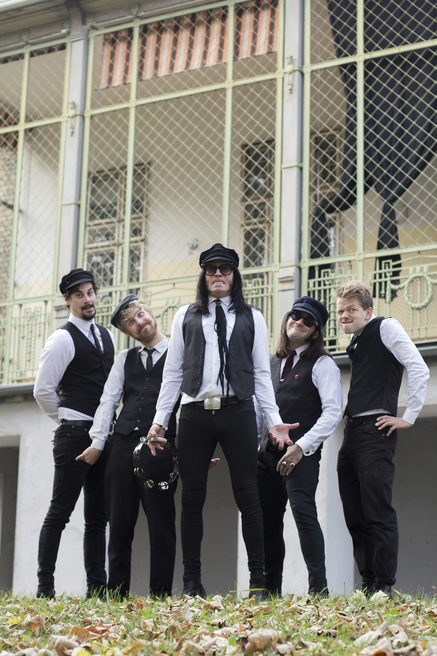 WILD EVEL & THE TRASHBONES have the genre Garage Punk attached to their hats, their shirts, their ties and their winkle pickers. What started as a side project of The Incredible Staggers’ frontman and members of former teenbeaters The Roadrunners has grown to be a unique quintet, trotting the globe with their version of Rock’n’Roll. After some lineup changes Fernando Terror, the latest addition, has replaced Wild Evel on Farfisa and thus unleashed the performance monster again. On drums Bernie T. Bone is beating the furs, Paul Howl is pulling the strings and Murphy Morphine takes care of the basslines.
Though all members have their personal roots in various subcultures, they agree on communicating in the beat and the groove of the 1960s – of course with an increase on tempo and all the power of the amps, while they are still not too cool to dress up unison and go wild on stage. You’re likely to hear influences from The Cramps, Billy Childish, The Miracle Workers or The Fuzztones but also from earlier pioneers such as The Sonics, Screaming Lord Sutch and Howlin’ Wolf. Additionally the Trashbones’ appearance especially gives tribute to all the 60s Garage Unknowns you may or may not know from samplers like the Teenage Shutdown or Back From The Grave series. With distorted fuzz guitars, which combined with the screeching organ create spheric vibes, the band knows how to attract their audiences.The catchy melodies, raving choruses, classic blue notes and furious breaks will cast a spell over listeners.
If you’re tempted to make sense of the lyrics, feel welcome in their Poe-esque world on the psychotic bottom of your soul, charmingly striving for the all so ironic caveman rites and true freedom inert to all of us. Since their formation in 2009, Wild Evel & The Trashbones have played every stage you can imagine. From the beer tent with cyclists burning out their tyres over cult clubs and remarkable festivals, the combo have performed in Moscow and St. Petersburg, playing in European metropoles and little villages from Norway to Spain, from London to Hirschkofen. In June 2018 the Trashbones crossed the Atlantic Ocean to play the American west coast and the local deserts. After eight shows among L.A., San Francisco, Las Vegas and San Diego, they managed to stop by in Mexico City to play at the Wild O’Fest, fronting about 2,000 people in the legendary Carpa Astros.
With two longplayers – Tales From The Cave (Soundflat Records, 2012) and Digging My Grave (Dirty Water Records, 2017) – these five freaks continue touring and will soon have two new 7 inch records as appetizers for their upcoming album.