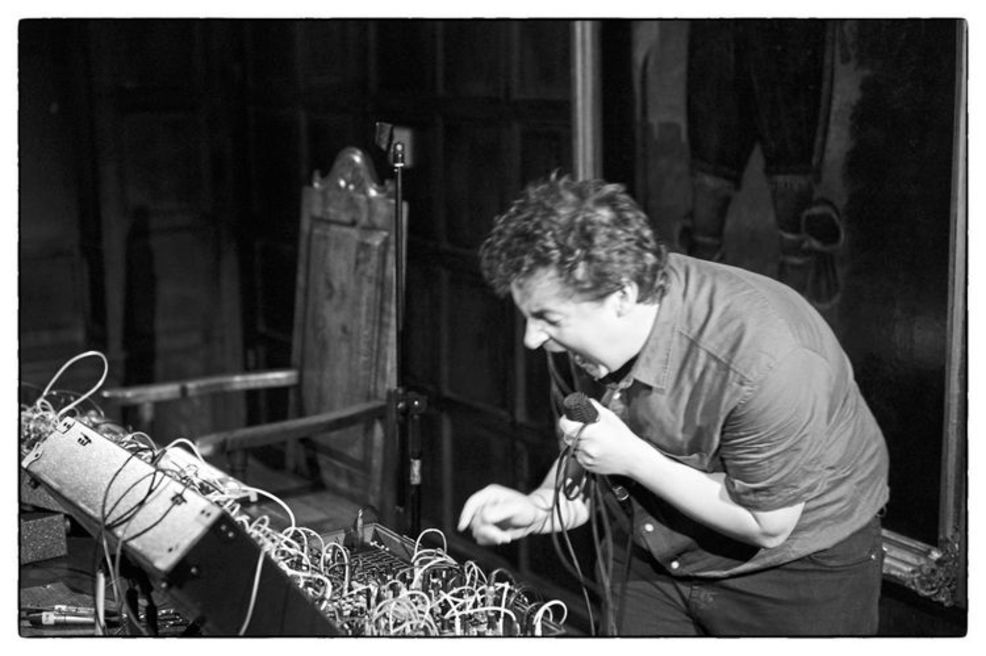 FINLAY SHAKESPEARE
https://www.youtube.com/watch?v=y0SAgdcksN4
EMEGO 275 / Finlay Shakespeare
Solemnities
Finlay Shakespeare is a freak. With this, his second album for Editions he confirms this. As a one man band it often strikes the listener as bewildering that he can do all this; the programming sits firmly in the realms of genius, the constant punch of melody upon melody leaves a pleasant sting of surprise and as a lyric writer there’s a part of his moniker that seems apt. Solemnities is more gritty than his previous outings as a more raucous industrial edge is grafted on to his epic electronic pop leanings. Occupation launches proceedings as a snarling electro pop monster. Finlay’s vocals have never been delivered with such urgency.
From here it’s one melodic banger followed by another as Shakespeare truly hones his voice and craft into something utterly of his own devising, despite, or as a result of, the specific world of electronic music he is referencing. Covering a wide range of emotional states, from anger to euphoria this is a wild complex dip into one man’s world perfectly crafted into an external release. She Says / Nothing Ends concludes proceedings with an anthem so bold it would be a worldwide hit if the world could be told. Find a comfortable position, turn Solemnities up loud and let Finlay take you on this startling spectacular trip.
der standard: https://www.derstandard.at/.../finlay-shakespeares...
the quietus:
https://thequietus.com/.../25842-finlay-shakespeare...
BRUCH
https://www.youtube.com/watch?v=Kuv7ShM9Ccs&t=102s
Bruch is the long-standing solo project of Philipp Hanich, based in Vienna / Austria. Experienced in pop culture’s diverse tropes and a wide range of subculture’s standard dances, Bruch leverages the allures of an emotionally charged crooner in lugubrious gray-black, just as much as he knows to convince as a vitriolic spitfire the very next moment. Vulnerable yet forceful, grandiose yet intimate, sometimes stroppy and cracking in overdrive – Bruch’s evocative and unadorned vocal style instantly sucks you into his stories.
Bruch’s first LP released in 2012, ever since he ’s been merging dark electronics with the grand gestures of rock’n’roll (noir) and Schlager music in a highly distinct and minimalist manner. Bruch comes in different shapes, appears as a solo act, but sometimes also fully dressed in a band-outfit. Pulling up all styles of music that are suitable for his purposes, Bruch sets out to do something, then: does it. For he `s 1, 2, 3, 4 … various!
Besides Philipp Hanich’s work as a musician and visual artist (his cover artworks are hand-painted, and as stark and uncompromising as his music), he also co-founded the music labels Cut Surface (since 2016) and Totally Wired Records (2012-2016).
»So geht die Essenz von archaischem Rock’n’Roll-Hall in synthetischen Kathedralen« – Fritz Ostermayer // FM4
»No other crooner has ever been so unafraid of kitsch since The King (and here i mean: Drafi Deutscher!) left the building. You better bring a hanky to this party.« – Jaques Braque
„BRUCH. I love this dude. His music is like Scott Walker, the Cramps, Beastie Boys, Roy Orbison, synths and 808s had a baby. So sick.“ – sixofswords
„Well crafted pop songs that sound like Lee Hazelwood and Alan Vega were locked in a room for a month and told to make a record.“ – Codex Empire
»Deep and haunting« – American Pancake