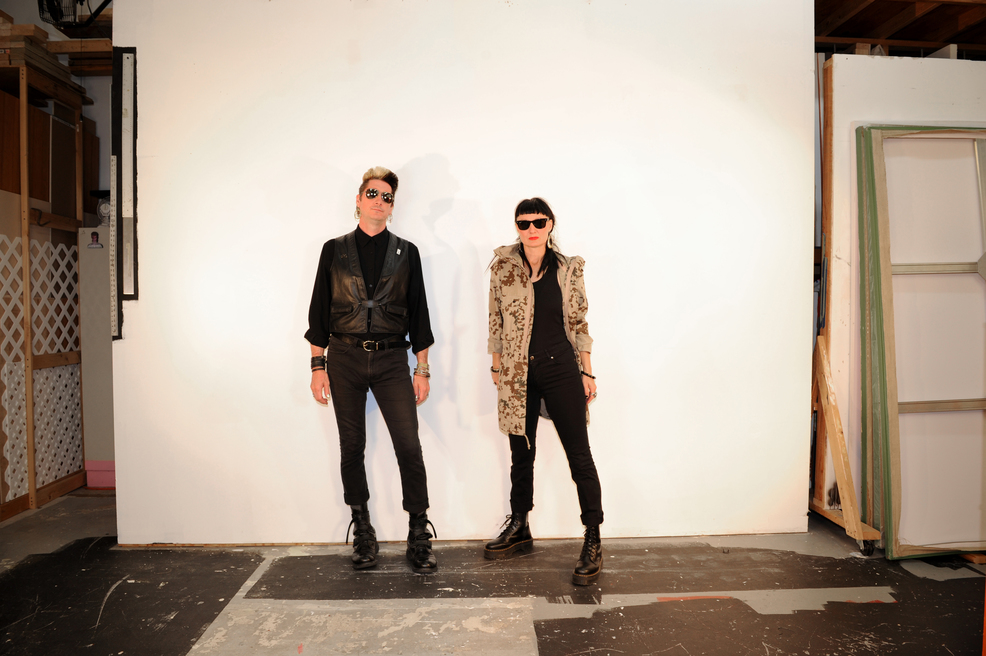 ADULT
https://www.youtube.com/watch?v=MBOXBE9V5Zo
With over 23 years working and a sprawling discography to show for that labor, Adam Lee Miller and Nicola Kuperus have spent their entire career as ADULT. obscuring any defined genre or style, writing and recording albums as art for life’s sake. On their latest album, the group are back at it with some discordant, doom dance sludge to mark their 9th studio album Becoming Undone. Written between November 2020 and April 2021, the album might be the bands most non-conformant yet. Sure there’s plenty of dance bangers, but ultimately the album is riddled with impermanence, loss and looping dissatisfactions.
A brief history of ADULT.
In 2020, ADULT. released Perception is/as/of Deception on DAIS, an anxiety fueled cyclone of pandemonium that only ADULT. would know how to harness. While This Behavior (2018) was recorded in the isolated snow-covered woods of northern Michigan, Perception is/as/of Deception was given life in a temporary space the duo created by painting their windowless basement entirely black, with the sole intention to deprive their senses, question their perceptions, and witness the resulting ramifications. The pieces that make up Perception is/as/of Deception might be perceived as their most punk-infused and introspective work to date. The elements of frustration and apprehension that have consistently woven throughout their material are at full mast, although augmented by a strident and more “head-on” approach. Bill Pearis of Brooklyn Vegan writes “The synths, drum machines and vocal delivery all feel more intense, with tracks like "Second Nature" and "Total Total Damage" hurtling you through a strobe-lit tunnel with a cinderblock on the gas pedal, the brake line cut, and doors have been welded shut.”
In September of 2018, ADULT. released their seventh album, THIS BEHAVIOR on DAIS. Called “…one of the best records of their career…” by Ryan Lathan of Pop Matters, the album began as 23 demos written and recorded in a remote cabin in the woods of Northern Michigan during the dead of winter. In total isolation, and with a reduced amount of gear (a modified version of their live setup) on the cabin’s kitchen table, the duo were completely immersed in an incessant, inescapable studio of their own making – looping, repetitive analogue sequences grinding away day and night.
In 2017, ADULT. released their sixth album entitled "Detroit House Guests" on MUTE Records. This project was funded through a Knight Arts grant which allowed them to collaborate with six guest artists: Dorit Chrysler (NY Theremin Society), Shannon Funchess (Light Asylum), Robert Aiki Aubrey Lowe (Lichens), Michael Gira (Swans), Lun•na Menoh (Les Sewing Sisters) and Douglas McCarthy (Nitzer Ebb). Philip Serburne for Pitchfork writes “On their first album in four years, the married electro duo curate a highly collaborative record that is richer and stranger than anything they've done before. It's unusually electrifying.”
ADULT. have released five other full length albums on Ghostly International, Thrill Jockey and their own label founded in 1995; Ersatz Audio. They also released their first live album in 2017 on Third Man Records.
ADULT. have remixed the likes of LIARS, John Foxx, Barry Adamson and Death in Vegas, to name a few. They are currently working on a collab 7” with Planet B - members Justin Pearson (The Locust) & Luke Hensaw.