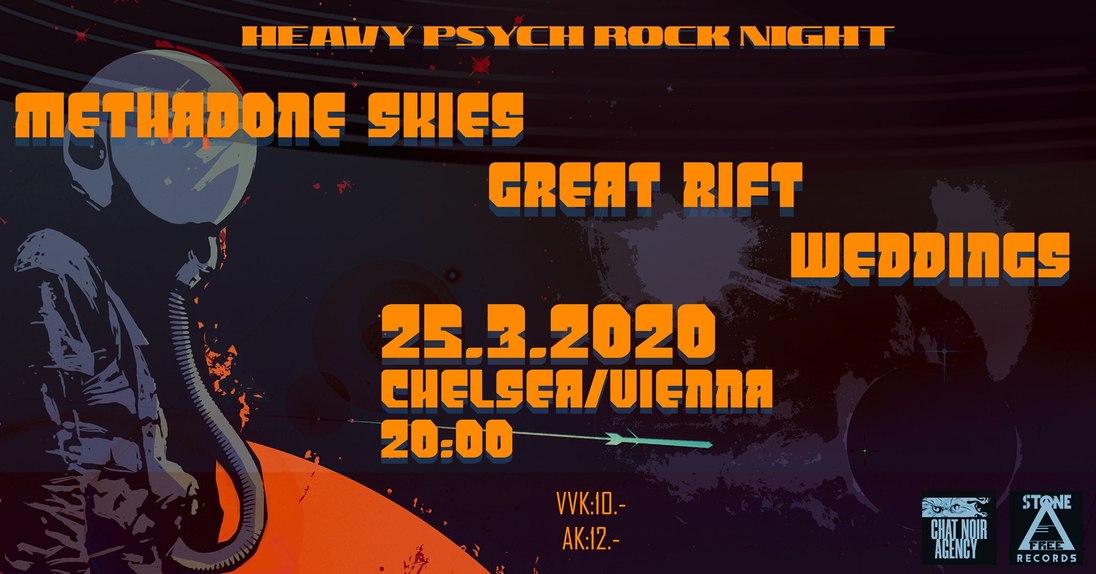 Methadone SkiesMethadone Skies are an independent, psychedelic rock band from Timisoara, Romania. Active since 2009, the group has released 3 full length records and one EP so far. Each LP shares its own musical direction, often leaning into post rock, stoner, doom metal and/or progressive territories.2019 also marks the group’s 10th anniversary and the best way to celebrate it is by playing gigs and unveil new music. Thus, in May 2019, their 4th studio album, Different Layers of Fear will see the light of day through their own imprint, Haywire Records. Featuring 7 songs that stretch over 72 minutes, this is undoubtedly the most diverse and grandiose effort so far. Incorporating all their strengths and taking steps forwards, these songs represent everything Methadone Skies is about without losing the sonic identity.https://methadoneskies.bandcamp.comhttps://soundcloud.com/methadone-skiesGreat RiftHeavy Psych Rock inspired by the heavy blues, hard and psychedelic rock of the 70s up to the beginning of the StonerRock in the 90s of the last century, peppered with a passionately distinctive singing voice!The four men, who come from the vast country of Austria, chose Vienna as the base for their work. In the stories they tell, the band shares their thoughts and lives the resulting emotions around the second great passion of the musicians: the Universe, and all the possible as well as impossible fantastic fantasies, which also serve as a great source of creative inspiration.Great Rift likes to lose theirself musically in the most infinite expanses, but is at home with their sound here on Planet Earth at the Underground…After the Band was born in 2016, they released in 2017 their EP "VoodooWoodland" on Electricfire Records. In June 2018, their first album called "Vesta" was released on StoneFreeRecords and Electricfire Records. After personnel castling behind the drums, the band reinvents itself in 2019 and plans to release another album in 2020.www.greatrift.atContact: office@greatrift.at WeddingsWeddings is an explosive and moody rock power trio indebted in equal parts to grunge, desert rock, psych rock, punk and doom. The brainchild of Canadian Jay Brown (Vocals/Guitars), Spaniard Elena Rodriguez (Vocals/ Drums) and Swede Phil Nordling (Bass), the band was created in 2017 after the 3 met while living in Salzburg, Austria.www.weddingstherockband.comStart: 20:00 UhrVvk 10,- / AK 12,-Artwork by David Hüttner Presented by Chat Noir Agency & StoneFree Records