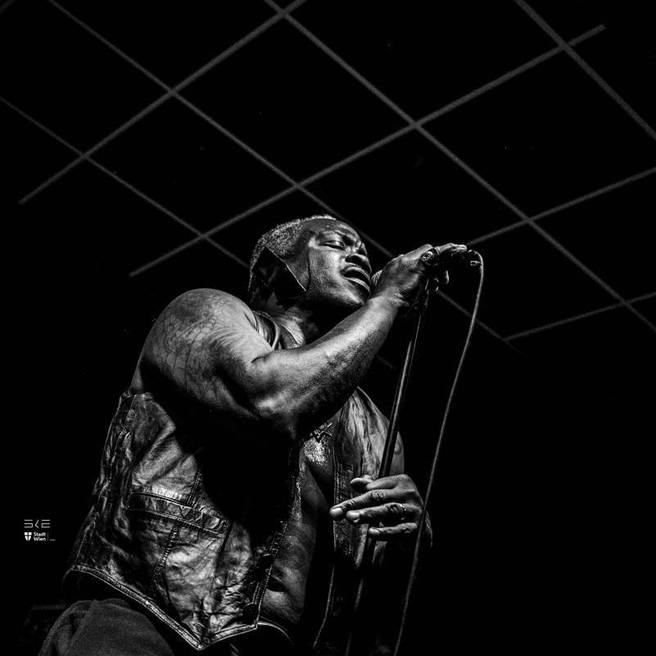 Named after the Spanish filmmaker Luis Buñuel, the only filmmaker to first make his bones by making good on what happens when straight razors meet eyeballs, BUÑUEL’s newest Killers Like Us — the third part of a trilogy that started with A Resting Place for Strangers, and then The Easy Way Out – is a killer addition to the canon of good music for bad people.
Produced by a near-super group of global significance BUÑUEL boasts the sound work of the Italian trio of guitarist Xabier Iriondo (Afterhours), the bass of Andrea Lombardini (The Framers), and the drums of Francesco Valente (Snare Drum Exorcism), along with the vocals of Eugene S. Robinson (OXBOW).
Eugene S. Robinson, vocals, lyricist and owner of the 44 magnum revolver on the record cover has spent the last 30 plus years with American art terrorists OXBOW.
Xabier is the deus-ex-machina of some of Italy’s most adventurous musical projects as both guitarist and sound manipulator for dozens of bands on more than 50 records with major and independent labels whose work has seen him playing live on three continents. And counting.
Andrea Lombardini, a composer, producer and electric bass beast has been playing in Italian and international jazz, pop, rock and just about everything with everyone including most significantly David Binney, Mark de Clive-Lowe, Jason Lindner, Richard Julian, Michel Godard and many more.
Francesco Valente, composer, percussionist, improviser and sound extremist, is a vital slice of the Italian rock band Il Teatro Degli Orrori.
With their first two records appearing on Italy’s La Tempesta International, for this their third, BUÑUEL is branching out to have Profound Lore Records handle the non-Italian speaking portion of the world. A development that will let them play well beyond the previous tours European stomping grounds.
Recorded in the midst of the pandemic by Andrea De Marchi, Vocals by Monte Vallier, KILLERS LIKE US was mixed by Giulio Ragno Favero (Zu) and Mastered by Giovanni Versari (Muse). The album will see release on February 14, 2022, on CD/LP/Digital by Profound Lore Records and La Tempesta International.
BRUCKMAYR
Bruckmayr is not new to the game. Besides being the singer in the bands Fuckhead and Wipeout, he turned more and more producer for the named bands and for various shadowy side projects. Bruckmayr keeps evolving a hybrid mix of heavy bass and post industrial music. Feel the bass weight and follow his strange voices into the wild darkness!
sound cloud link: https://soundcloud.com/distancefield/sets/various-failures
https://www.facebook.com/crash.urunga
https://www.youtube.com/watch?v=7klTa1PDrDY