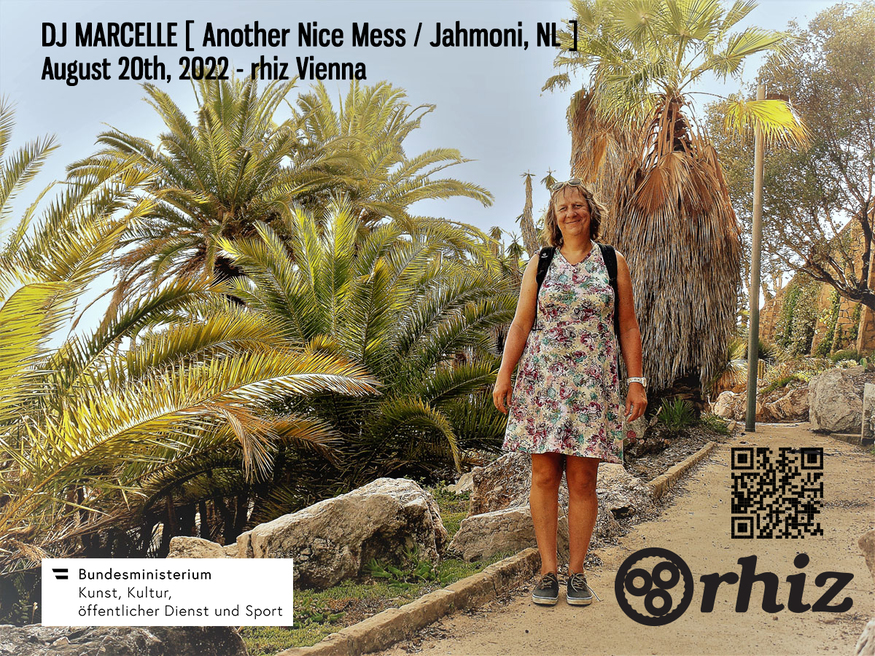 DJ MARCELLE
Surprise, adventure, entertainment and education: Four key words often used for describing Dutch DJ and producer Marcelle / Another Nice Mess. Using on stage three turntables, Marcelle takes her mix talents to high heights. She is as much, or even more of, a musician as she is a dj.
She produces her own music; the German label 'Jahmoni' has been releasing a series of vinyl only Marcelle releases: 'In The Wrong Direction' (10''), Too (12'' ep), 'Psalm Tree' (12'' ep), 'For' (10'', a tribute to the late Mark. E. Smith). Last May she released a LP, 'One Place For The First Time'. A new album is scheduled for early 2020.
Between 2008 and 2014 Marcelle has released four double vinyl albums on the German 'Klangbad' label, set up by Hans-Joachim Irmler, founder member of the legendary krautrock band Faust.
On stage, by putting different styles of music in a different context, Marcelle changes the way we experience those individual styles. She fuses musical styles like no other, making it seem like they always belonged together and making the audience believe they are listening to one track instead of three played simultaneously!
She plays with expectations and roles: Environmental sounds are combined with avant garde noises, animal sounds are used and mixed with left field techno, free jazz, weird hip hop, cutting edge electronica, new African dance music, dubstep, dancehall and lots of less classifiable records.
She is an original, skilled mixer, with a very distinctive style of her own, avoiding most dj-cliches and stale rules. As much inspired by avant garde art movements as fluxus and dada, the real life absurdism of Monty Python as by the wild experiments of dub, post-punk and the latest developments in electronic dance music – Marcelle has always been following musical developments very closely and has a keen ear for innovative and ‘new’ sounds. She strongly believes in the excitement and artfulness of creation and development. With her extensive record collection of some 20,000 vinyl and counting, Marcelle has a strong historical knowledge of past and contemporary ‘underground’ music.
On stage and on her records Marcelle transcends a sense of openness and a feeling of freedom, which often have her described as ‘totally enriching’, ‘a true ear opener’, a real ‘pioneer’.
Marcelle plays all over the world, both at festivals, in clubs and in meseums/galleries. She was a live dj for a Barcelona circus/performance group. The Uganda Nyege Nyege Music Festival has appointed her as 'lifetime resident dj'.
For Marcelle the musical form is in a way irrelevant, as long as some urgency is there and a need for not standing still. Therefore sometimes bookers, journalists and audience members initially get confused because Marcelle is hard to pigeonhole. A fitting description would be ‘avant garde ethno bass’ - but you decide.