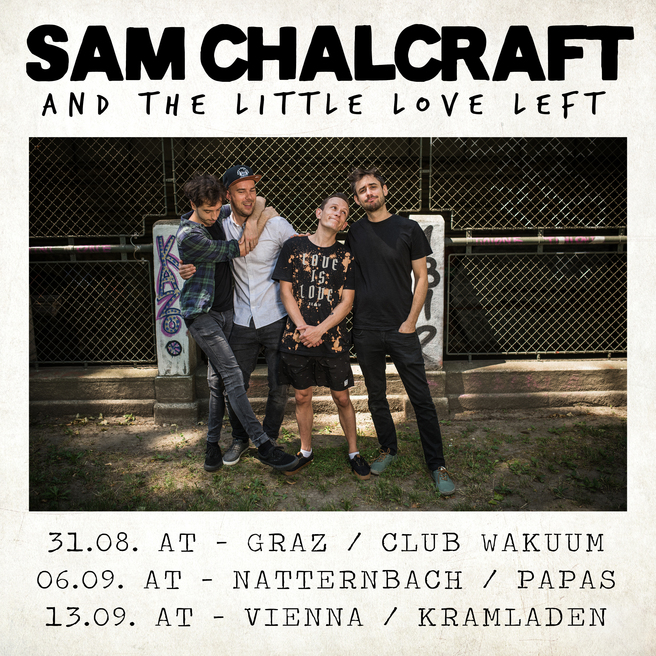 ‘From Busk till Dawn’; A tale in finding your feet.

It’s strange how sometimes, after years of being on the move, it’s only when you finally find home that the real journey can begin. When Sam Chalcraft arrived in the ‘big city’ of Vienna in late 2016, guitar slung across his shoulders like a modern day, millennial Dick Whittington, he threw himself into Vienna’s thriving Singer Songwriter and Punk scenes, and embraced any and every possible stage. From the street corner to the coffee shop, metro stations to squats, smokey bars to cosy living rooms-for three years Sam’s contagiously catchy songs, and disarming honesty have rung out to the ears of Vienna-and further since to some of the continent’s biggest stages (Nova Rock, Punk Rock Holiday, Bay Fest, and Mighty Sounds, to name but a few).

Having been raised upon a heady mix of Punk Rock and Ska music from an early age, one particular band to stand out for the rosy cheeked, nine-year-old Sam were Lagwagon. Furthermore, the label ‘One Week Records’, begun by singer, Joey Cape, produced what were hugely defining records, and cooked up a dream for Sam to one day release music under that label. Years later, after Joey and himself became firm friends following the OWR Competition, they hatched a plan to produce Sam’s debut LP in an intensely creative week in L.A. Not a bad result for that nine-year-old Punk Rock bumpkin turned street musician from the seaside, I gotta admit.

Now coming off the back of a European summer tour with the aforementioned Joey Cape, these songs are being presented with Sam’s band ‘The Little Love Left’, at three release shows in Vienna, Graz and Upper Austria. Expect more power, grit, and a healthy dose of good ol’ fashioned Rock n’ Roll.

‘From Busk till Dawn’ was released digitally on One Week Records July 31st and on vinyl via SBÄM Records on August 9th 2019.

The show will be opened by the wonderful singer-/songwriter Maria Burger, who will serenade the audience with her beautiful songs.